If you've been paying attention, you might find it easy to believe that the U.S. carriers are actually set on preventing Windows Phone from succeeding.

No one can deny that Windows Phone started out slowly; the first release left a lot to be desired and even die-hard Microsoft fans held off buying one. Despite the announcement at the Mobile World Congress in Barcelona in February 2010 of partnerships with a slew of major hardware vendors, when the devices were launched in October of that year, the "pickings were slim," as my granddad used to say. There weren't many choices and those that were available weren't very exciting. Other than the Windows Phone 7 OS, the devices offered nothing special in the hardware department and were missing a number of features that users of Android phones had come to expect.

Nonetheless, Microsoft's initial effort at a complete "do-over" for their phone OS got a lot of favorable reviews. Things got better with Mango (Windows Phone 7.5), with many reviewers concluding that the improvements brought Windows Phone into the arena as a real contender and with technical analysts (Gartner, Forrester) predicting that it would eventually outsell the iPhone. Meanwhile, actual sales still lagged badly.

Everybody seemed to like Windows Phone, but few were buying it.

Several reasons could account for this, but something that seems to keep popping up is the complete lack of enthusiasm that the cellular carriers -- at least those in the United States -- have exhibited for the platform. I'm usually skeptical of conspiracy theories, but if you've been paying attention, you might find it easy to believe that the U.S. carriers are actually set on preventing Windows Phone from succeeding.

Verizon: What could have been

Microsoft and Verizon are like that "perfect couple" who once seemed to have all the secrets to a wonderful relationship. Verizon carried a good selection of Windows Mobile phones, especially the Samsung models. I got my i730, i760, Omnia, and Omnia II through them. I would have expected Verizon to offer me a seamless continuation of my Windows experience when Microsoft dropped WinMo and went "all in" with the new Windows Phone. But somewhere along the way, something happened.

Actually, three things happened. The first was the invasion of the Droids. Verizon put a lot of advertising dollars behind the launch of its first Android phone from Motorola, building suspension with a great television campaign that included the Stealth commercial as well as the "Droid Does" ad that took direct aim at the iPhone. The Verizon Droid and its Android successors sold well, positioned as alternatives to the iPhone, which was at that time available only on AT&T. Windows Phone 7 wasn't out yet, and Windows Mobile, with its touch-unfriendly "miniature version of Windows" interface, was hopelessly outdated in a world where touch and simplicity were king.

But, as exciting and appealing as Android might be, Verizon certainly could have found enough love in its corporate heart for two. But then something much more damaging to the relationship happened: the Kin. Just as "kin folk" can sometimes be the downfall of a human marriage, this Microsoft/Verizon progeny seemed to lead to an alienation of affections that was never repaired. 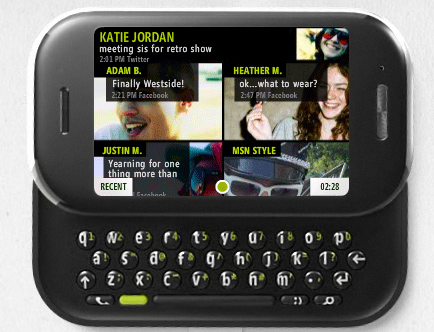 The Kin was Microsoft's billion-dollar attempt to capture the tween/teen market with a social networking-oriented feature phone that was considered a "close relative" of the upcoming Windows Phone 7. It was a resounding failure and was discontinued only a few weeks after its debut. The Kin was rumored to have sold only around 8,000 units. It was briefly revived and then killed again in December 2010.

Some blamed Microsoft for making a phone that was so lacking in features that the iPhone and Android phones had. Others blamed Verizon, saying that the high cost of the required data plan was unrealistic for the target audience. Either way, the relationship between the two companies never seemed to be the same after that.

Then this year, AT&T's exclusive hold on the iPhone finally ran out, and Apple's best-selling smartphone came to Verizon. If they had ever felt they needed Windows Phone, the feeling seemed to dissipate entirely once they had the iPhone in their stable. I test Android phones for Verizon, and early this year when I asked the folks at their regional headquarters -- who eagerly talk up their latest Android models to me -- about Windows Phone 7, the disinterest in the air was so thick you could cut it.

Verizon finally did get their first Windows Phone 7 device, the HTC Trophy in May, but there was no hoopla as there is when a new Droid is introduced. The only folks who seemed to know or care were those Microsoft employees with Verizon contracts who had been waiting for their free (Microsoft-reimbursed) WP7 phones. Over six months later, the Trophy is still Verizon's only Windows Phone device.

Maybe one of the reasons the decision makers at Verizon never got too excited about Windows Phone, the Kin aside, was AT&T's announcement early on during Windows Phone 7's journey to market that AT&T was going to be the "premier" carrier for Microsoft's phones. Or did AT&T obtain that elevated position because of the falling-out between Microsoft and Verizon? It's a "chicken and egg" question to which we'll probably never know the answer.

Whichever came first, AT&T obviously has a closer relationship with Windows Phone than Verizon does. They offered a Windows Phone months before Verizon did, and they currently have five models of Windows Phone in their lineup -- although three of them are versions of the Samsung Focus.

They offer the high-end HTC Titan, which has specs and features that are comparable to the top Android phones (4G support, a 4.7-inch screen, a 1.5-GHz processor, 16 GB of storage), although it lags behind in some areas (for example, the processor is single core, and it has only 512 MB of RAM when the top Android phones such as the Droid Razr and the Galaxy Nexus have 1 GB).

At least with AT&T, a Windows Phone fan has some choices, but the carrier still doesn't seem to have gone "all in" with Windows Phone. I received a holiday advertising booklet from AT&T recently that consisted of 28 pages of smart phones and accessories. The iPhone 4S was prominently featured, as were a number of Androids and even Blackberry, but I went through the whole book twice and didn't find one Windows Phone. On the day I'm writing this, the AT&T wireless web site features an iPhone 4S, a Blackberry Torch 9810, and an iPad with iHome iD37.

More troubling than the lack of advertising are the reports I've heard from both AT&T and Verizon customers that when they've gone into the wireless carriers' stores to look for a Windows Phone, they've been actively discouraged by the salespeople. I experienced this personally when I was looking at the Trophy in a Verizon store; the salesman almost laughed and said, "We don't sell many of those. You might want to look at these (Android phones) instead."

The problem is so widespread that one Windows phone fan even started a web site for reporting "retail bias" called Windows Phone Tattletale. It's full of stories from users all over the country and the world about their experiences buying (or trying to buy) Windows Phone devices.

In search of a Lumia

I know a number of people who wanted to wait on buying a Windows Phone until Nokia came out with its devices. Now the Nokia Lumia has hit the market in time for the holiday season in two sleek, slim models (the 700 and the 800) -- but not through any of the U.S. carriers. The 800, in particular, has very decent specs , gets high marks for design, features, and performance, and is selling well in the U.K., but it won't be launched in the U.S. until sometime in 2012 -- thus missing out on the holiday sales seasons when many people traditionally upgrade their phones.

There has been speculation that the holdup could be the wait for the rollout of AT&T's 4G LTE network. Certainly Windows Phone needs to support LTE (and dual-core processors) sooner rather than later if it's going to seriously compete with Android, and there are rumors that the next iPhone (iPhone 5) may be LTE-capable, as well.

However, it's frustrating for those in the U.S. who want the Nokia Windows Phones but are unable to get them from their mobile carriers. (Of course, if you want one badly enough, you can buy an unlocked Lumia 800 handset for $699.99 through reseller Expansys. It will work on AT&T's 3G network. But if you don't have seven hundred bucks to spend on a phone, you're out of luck for now.)

Meanwhile, it's likely there are many people buying themselves (or their loved ones) new phones for Christmas who might have been attracted to the Lumia, but they will end up buying a sleek new Android Razr or an iPhone instead because they can get it here and now. Is it the carriers, the handset makers, or Microsoft who's responsible for not getting the Lumia out in the U.S. in time for the holiday sales rush?

I'm not actually suggesting that the U.S. wireless carriers all huddled together in some secret back room and hatched a plot to keep Microsoft at a disadvantage in the smart phone market. But personal experience, observation, and reports from many others do indicate that for whatever reason(s), the carriers aren't going out of their way to showcase Windows Phone devices. They are leaving them out of their advertising or relegating them to the back pages and are even actively trying to talk customers out of buying them in their retail stores.

Microsoft already has an uphill battle ahead, going up against the immense popularity of iPhone and Android. With the carriers working against them (or, at best, not working for them), gaining market share is going to be even tougher. The company has gone up against tough competition before (NetWare, Netscape, WordPerfect) and won, so I'm not counting Windows Phone out yet. But I do think they would be in a much stronger position if not for the "unfortunate incident" with the Kin and with a little help from their carrier friends. Despite all that, though, Windows Phone is starting to win hearts and minds -- even those of some former iPhone fans. Gartner might end up being right after all.