Over the last week I've been reading the posts in the discussion area for my last blog post, "The Windows Explorer Ribbon in Windows 8 Is Ready for Prime Time," and found quite a few comments that expressed concern over how Microsoft had ruined Windows Explorer by putting a Ribbon on it.

Of course, there were also plenty of positive comments that expressed excitement about the changes brought on by the Ribbon. I'm glad to hear that a lot of you are ready to move on with the new features in Windows Explorer.

For those of you who are a bit more apprehensive, I thought I would take some time to investigate what I'm calling the compatibility features in Windows 8's Windows Explorer; i.e. things that make the new Windows Explorer compatible with the old Windows Explorer and may help ease the transition. (Keep in mind that you will have to take the word compatible here with a grain of salt.)

I believe that the three main complaints about the new Windows Explorer in Windows 8 are 1) I want to get rid of the Ribbon, 2) I want be able to use the old keyboard shortcuts that I have memorized over the years, and 3) I want a customizable toolbar like I had in Windows XP.

One of the main complaints about the Ribbon is that it is so big that it takes up more screen real estate than it should, thus reducing the amount of space available to display files. Well, that's not actually true. According to the Windows 8 team, the new Windows Explorer has been modified and optimized for wide screen format in such a way that even with the Ribbon, it has the same amount of vertical space for content that Windows 7's Windows Explorer had. 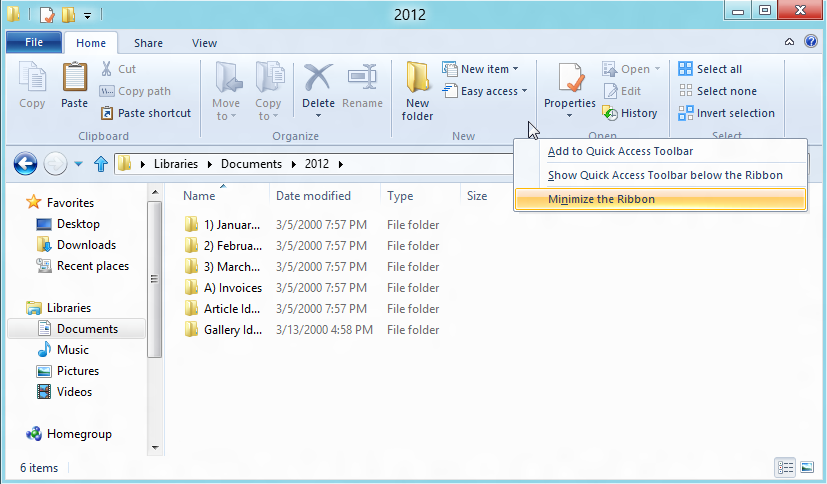 When you do, the Ribbon will appear in Windows Explorer temporarily only when you activate it. As soon as you press Esc or click on another part of the screen, the Ribbon will instantly disappear. For example, if you select one of the tab titles, which remain at the top of the window, as shown in Figure B, the Ribbon will temporarily appear. You can reactivate the Ribbon anytime by selecting the Minimize the Ribbon command again to remove the check mark. 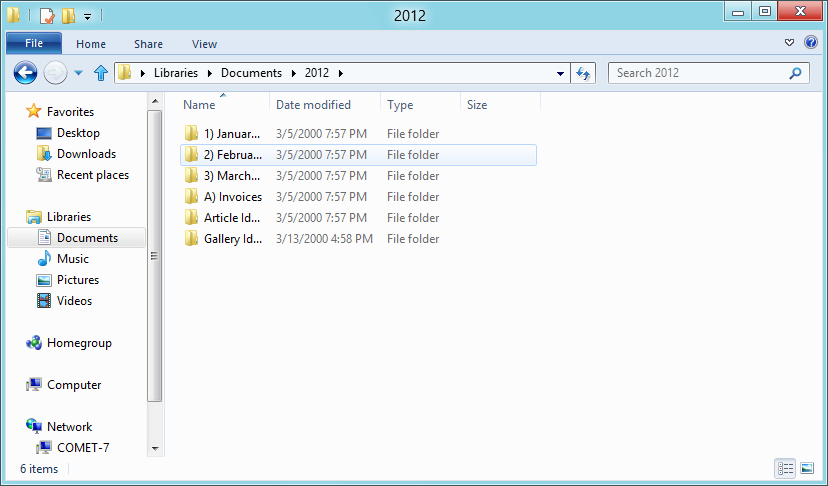 As I have been using the new Windows Explorer, I have verified that all the standard keyboard shortcuts shown in Table A still work as they did in Windows 7.

Table A: All these standard keyboard shortcuts still work in the new Windows Explorer.

For example, if you press [Alt] in Windows Explorer's main view, you'll see pop-ups that show the available hotkeys. If you then press H, which is the hotkey for the Home tab, you'll then see pop-ups showing the hotkeys for all the commands available on the Home tab. This sequence is illustrated in Figure C.

When you press the [Alt] key, a pop-up appears that shows you the available hotkeys.

With this system of pop-ups guiding the way, learning the new keyboard shortcuts will be an easy task. For instance, the Map as Drive command is on the Easy Access menu on the New section of the Home tab and its hotkey is M. Therefore, the keyboard shortcut for instantly accessing the Map as Drive command is [Alt]+H+A+M. While it may look a little weird at first, after you use it a couple of times, you'll remember it easily. (Keep in mind that this is a sequence -- in other words, you press them one after the other; not all at the same time.)

The Quick Access Toolbar now appears below the Ribbon.

Even if you don't like the Ribbon, Microsoft has made it very easy to live with when you use what I am calling the compatibility features. Are you a part of the Anti-Ribbon movement? Will the features I've shown in this article make it easier for you to accept the Ribbon? As always, if you have comments or information to share about this topic, please take a moment to drop by the TechRepublic Community Forums and let us hear from you.