AutoLab is a way to bring up a VMware environment through scripted installs to create test/lab environments. Read why Lauren Malhoit calls this tool awesome.

It's my opinion that every person who works with VMware should have a test lab. Although it would be ideal to have the same hardware as your production lab and completely duplicate the setup, that's often not feasible. There are also things that come along with a test lab that make them annoying, for lack of a better word. Either you messed something up during testing and need to rebuild, or you'd like to test a different setup, which means you need to start completely over. This is where AutoLab comes in.

vExpert Alastair Cooke is the man behind this solution, with some help from Damian Karlson and Veeam, a virtual backup and recovery company. As of this writing, AutoLab version 1.1a is out. In general, AutoLab automates your lab setup. If you have access to VMware Workstation, VMware Player, or ESXi servers/clusters, then you can use AutoLab for free. I have mine running on VMware Workstation, which is running on a laptop with 16 GB of RAM. It is recommended you have at least 8 GB of RAM on whichever hardware you use. You can bring up different versions of vSphere (4.0 and up) as well. This is nice if you want to check out a new version, or if you need to test something on an older version.

A brief synopsis of the setup

There is a deployment guide that tells you exactly how to run this setup, but just to give you an idea, you download an .OVA file that contains several VMs (including ESXi hosts and a vCenter). You deploy the .OVA and that brings the VMs up in Workstation (or Player, ESXi, etc.), and they're all powered down. You then power on the NAS VM, which is just a FreeNAS solution. Once that VM is powered on, there is a build share you need to populate with several VMware and Microsoft ISOs. Once that share is fully populated according to the documentation, you can begin an automated build of the lab. It starts with your domain controller (the DC VM). All you need to do is power it on, and AutoLab takes care of the rest. Once this is done, there is a Validate script that makes sure all scripts and installs ran properly before you move on to the next step (Figure A). You then move on to scripted installs of the vCenter and hosts. Figure A 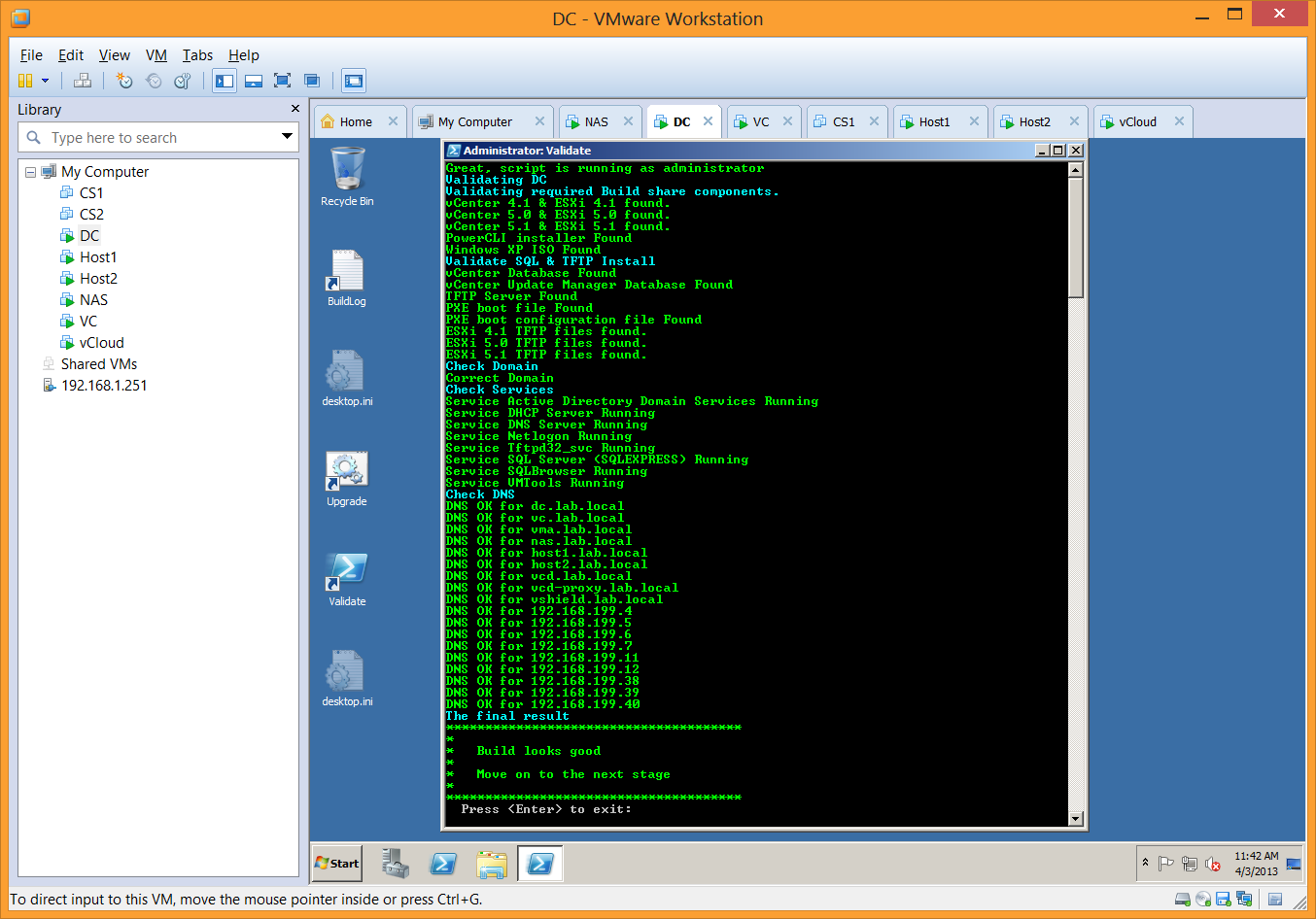 To be clear, AutoLab doesn't necessarily take less time to build a test lab, but it takes a lot less effort and babysitting. You can literally start the VM and then leave it alone for an hour to work on your production environment or read a book. All of the install information, networking, storage, etc. is taken care of for you.

In the newer versions of AutoLab, there are scripted installs for VMware Horizon View and VMware vCloud Director. This is perfect for testing these things out. Also, when something breaks or you need a new proof-of-concept, you just restart the build. In addition, you don't need to repopulate the build share if you decide to rebuild; so, once that's done the first time, you're all set. Veeam has two VMs in the .OVA file that let you test its Veeam ONE and Veeam Backup & Replication products.

I mentioned using VMware Workstation, Player, or ESXi before to install AutoLab; however, these still require that you have some hardware behind it all. A company called baremetalcloud is offering an AutoLab solution for those who don't have any hardware handy. You pay baremetalcloud monthly on a subscription basis according to the compute resources you need. A really nice thing about what baremetalcloud has done is they use Clonezilla to manage the images; this helps with the time to provision. What takes AutoLab around three hours to provision on your own hardware, takes only about a half hour using baremetalcloud. Mike Laverick has a great write-up about baremetalcloud and AutoLab.

AutoLab is such an awesome tool; I highly recommend it to anyone looking to build home or test labs. Some VMware knowledge would be helpful if you're looking to use AutoLab. It's not difficult, but I imagine it could be somewhat confusing to someone who hasn't installed ESXi or vCenter before.

Be in the know about smart cities, AI, Internet of Things, VR, AR, robotics, drones, autonomous driving, and more of the coolest tech innovations. Delivered Wednesdays and Fridays

Lauren Malhoit has been in the IT field for over 10 years and has acquired several data center certifications. She's currently a Technology Evangelist for Cisco focusing on ACI and Nexus 9000. She has been writing for a few years for TechRepublic, Te...