10 things you can do when Windows XP won’t boot

If your computer powers up okay, but the Windows XP operating system won't boot properly, you have some troubleshooting ahead of you. Here's a look at the likely culprits and what you can do to fix the problem.

When your computer hardware appears to power up okay, but the Windows XP operating system won’t boot properly, you have to begin a troubleshooting expedition that includes getting into the operating system, determining the problem, and then fixing it. To help you get started on this expedition, here are 10 things you can do when Windows XP won’t boot.

This blog post is available in PDF format as a TechRepublic Download. This entry was originally published as an article on January 26, 2006.

#1: Use a Windows startup disk

One of the first things you should reach for when troubleshooting a Windows XP boot problem is a Windows startup disk. This floppy disk can come in handy if the problem is being caused when either the startup record for the active partition or the files that the operating system uses to start Windows have become corrupted.

To create a Windows startup disk, insert a floppy disk into the drive of a similarly configured, working Windows XP system, launch My Computer, right-click the floppy disk icon, and select the Format command from the context menu. When you see the Format dialog box, leave all the default settings as they are and click the Start button. Once the format operation is complete, close the Format dialog box to return to My Computer, double-click the drive C icon to access the root directory, and copy the following three files to the floppy disk:

You can also try to boot the operating system with the Last Known Good Configuration feature. This feature will allow you to undo any changes that caused problems in the CurrentControlSet registry key, which defines hardware and driver settings. The Last Known Good Configuration feature replaces the contents of the CurrentControlSet registry key with a backup copy that was last used to successfully start up the operating system.

Keep in mind that you get only one shot with the Last Known Good Configuration feature. In other words, if it fails to revive your Windows XP on the first attempt, the backup copy is also corrupt.

To use System Restore, first restart the computer by pressing [Ctrl][Alt][Delete]. When you see the message Please select the operating system to start or hear the single beep, press [F8] to display the Windows Advanced Options menu. Now, select the Safe Mode item from the menu and press [Enter].

Once Windows XP boots into Safe mode, click the Start button, access the All Programs | Accessories | System Tools menu, and select System Restore. Because you’re running in Safe mode, the only option on the opening screen of the System Restore wizard is Restore My Computer To An Earlier Time, and it’s selected by default, so just click Next. Then, follow along with the wizard to select a restore point and begin the restoration procedure.

When a Windows XP boot problem is severe, you’ll need to use a more drastic approach. The Windows XP CD is bootable and will provide you with access to a tool called Recovery Console.

To boot from the Windows XP CD, insert it into the CD-ROM drive on the problem system and press [Ctrl][Alt][Delete] to reboot the computer. Once the system begins booting from the CD, simply follow the prompts that will allow the loading of the basic files needed to run Setup. When you see the Welcome To Setup screen, shown in Figure A, press R to start the Recovery Console. 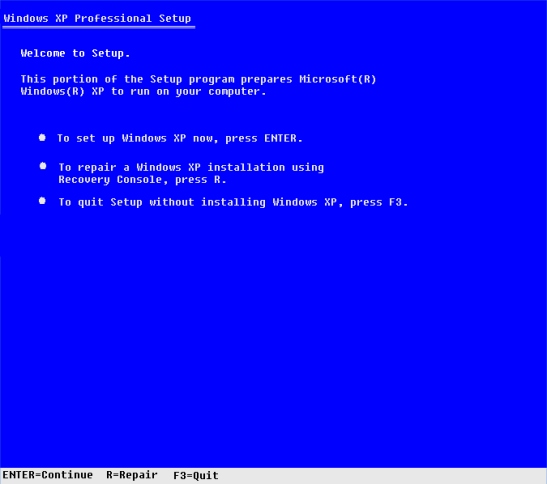 You’ll then see a Recovery Console menu, like the one shown in Figure B. It displays the folder containing the operating system’s files and prompts you to choose the operating system you want to log on to. Just press the menu number on the keyboard, and you’ll be prompted to enter the Administrator’s password. You’ll then find yourself at the main Recovery Console prompt.

If you suspect that Windows XP won’t boot because Boot.ini has been corrupted, you can use the special Recovery Console version of the Bootcfg tool to fix it. Of course, you must first boot the system with the Windows XP CD and access the Recovery Console as described in #4.

To use the Bootcfg tool, from the Recovery Console command prompt, type

Where /parameter is one of these required parameters:

If you suspect that Windows XP won’t boot because the partition boot sector has been corrupted, you can use a special Recovery Console tool called Fixboot to fix it. Start by booting the system with the Windows XP CD and accessing the Recovery Console as described in #4.

To use the Fixboot tool, from the Recovery Console command prompt, type

Where [drive] is the letter of the drive to which you want to write a new partition boot sector.

To use the Fixmbr tool, from the Recovery Console command prompt, type

When Windows XP encounters a fatal error, the default setting for handling such an error is to automatically reboot the system. If the error occurs while Windows XP is booting, the operating system will become stuck in a reboot cycle–rebooting over and over instead of starting up normally. In that case, you’ll need to disable the option for automatically restarting on system failure.

When Windows XP begins to boot up and you see the message Please select the operating system to start or hear the single beep, press [F8] to display the Windows Advanced Options Menu. Then, select the Disable The Automatic Restart On System Failure item and press [Enter]. Now, Windows XP will hang up when it encounters the error and with any luck, it will display a stop message you can use to diagnose the problem.

#9: Restore from a backup

If you can’t seem to repair a Windows XP system that won’t boot and you have a recent backup, you can restore the system from the backup media. The method you use to restore the system will depend on what backup utility you used, so you’ll need to follow the utility’s instructions on how to perform a restore operation.

If you can’t repair a Windows XP system that won’t boot and you don’t have a recent backup, you can perform an in-place upgrade. Doing so reinstalls the operating system into the same folder, just as if you were upgrading from one version of Windows to another. An in-place upgrade will usually solve most, if not all, Windows boot problems. 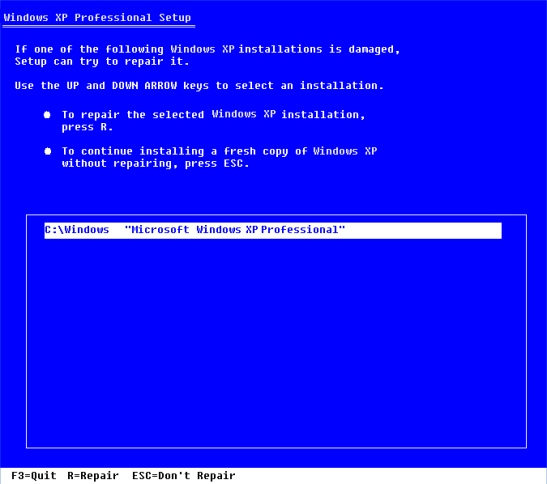 This screen will prompt you to press R to repair the selected installation or to press [Esc] to install a fresh copy of Windows XP. In this case, initiating a repair operation is synonymous with performing an in-place upgrade, so you’ll need to press R. When you do so, Setup will examine the disk drives in the system. It will then begin performing the in-place upgrade.

Keep in mind that after you perform an in-place upgrade or repair installation, you must reinstall all updates to Windows.

Share: 10 things you can do when Windows XP won’t boot
By greg shultz
My first computer was a Kaypro 16 \"luggable\" running MS-DOS 2.11 which I obtained while studying computer science in 1986. After two years, I discovered that I had a knack for writing documentation and shifted my focus over to technical writing.