Being a left-brain thinker can be an asset in the IT field. But as Alan Norton observes, it's not without its shortcomings.

The average person may envision IT as the home of the geek. I prefer to think of IT as the kingdom of the analytical thinker. Analytical thinkers, or left-brain thinkers, are straight-line thinkers. Logic, not emotion, rules in the land of the analytical. The very traits that make an analytical person poor with people make them good with computers. And that is perhaps why IT is loaded with socially inept information junkies who would prefer to hang out by themselves instead of attending a party.

I am a highly analytical person myself. This has served me well in my analyst/programmer jobs over the years. But I have also experienced the many downsides of being analytical. Perhaps you have experienced one or more of these curses of the analytical thinker yourself.

Analytical thinkers just can't get enough information. They devour Web pages about everything from the weather to the latest high tech gadget. They are gluttons for online discussions, but they're more often lurkers than participants. They have voracious appetites for facts and figures of any kind. They head straight for the specs page when shopping for anything more technologically sophisticated than an alarm clock. The siren call of the Internet cries out, "Step right up to the buffet -- all the information you can eat for one low price".

I can understand how this behavior might be really annoying to a family member. Please understand it is natural for humans to seek after information -- just not as compulsively as the analytical thinker seeks it. Come to think of it, this propensity for information binging might explain the swelled heads of a few IT personnel I have encountered over the years.

Most people see only one side of a controversial issue. Not the analytical thinker. To him, every issue has pros and cons. To him, the glass can be both half full and half empty at the same time. The analytical will inevitably be known as Dr. Doom to some and the eternal optimist to others. Being both a pessimist and an optimist gives the impression to friends that the analytical is wishy-washy, assuming he has any friends.

Because the analytical likes to gather as many facts as possible before making an informed decision, he may be perceived by others as being indecisive. The phrase "lead or get off the pot" could apply to the analytical manager who is so busy gathering information that he often overlooks the value of a quick, definitive decision.

I was once explaining parts of a client/server system to Mark, one of our mainframe guys. I pointed to the screen and said something like, "As you can see right here..." There was only one problem with that gesture and statement: Mark was totally blind. I was so embarrassed that I froze and said nothing. Had Mark been able to see he would have seen a flushed face with perspiration beginning to form at the hairline. This kind of "foot in mouth" behavior isn't that unusual for an analytical. I now realize that I should have had the courtesy to acknowledge my gaffe and apologize, but words failed me at the time. It may be more than 15 years late, but Mark please accept this apology for my insensitivity.

"You want me to do what-- skip lunch? Are you kidding?" Missing lunch to complete some inane pet project for my manager was physically upsetting. My blood pressure rose. My stress hormones rose. Yes, I was angry. Stand well clear of a hypoglycemic logician when sustenance has been withheld!

It can be hard to for analyticals to break their habits. They prefer the predictable, daily routine and are resistant to change. A left-brain thinker may lack motivation when starting a new project, but once started, they are like a persistent bulldog working to complete the project. It's not that they can't accept change; analyticals would just prefer it not intrude upon their comfort zone

I once told a young lady who I was friends with that she was overweight. Well, she did ask. I never got a chance to tell her that it, the weight, was in all the right places. Analyticals take matters literally -- too literally. It is not the intention of the analytical to be critical but rather to provide an honest assessment, although it is almost always perceived as criticism. Unfortunately for the well-intentioned analytical, people don't like an "honest assessment" of their looks, behavior, general hygiene, or body fat index. The irony is that these socially oblivious, albeit honest assessors usually don't take criticism well themselves.

If you are a manager trying to convince a team of programmers that a project can be completed two months ahead of schedule, you'd better come armed with facts to support how such a miracle can be achieved. The pushback you are almost certain to receive is a predictable response from the cynical analytical.

The very thing that makes analyticals good product reviewers is what makes them poor at the sales pitch. They thoroughly and accurately note both the positive and negative attributes of the product they are reviewing. One of the important skills needed to land a job is self promotion. While others may exaggerate their positive traits, the analytical person does not. Stating that you prefer working with computers rather than people may be an honest and unbiased analysis but is perceived as a black mark by the interviewer. I know I am weak at promoting myself. I have worked at improving my marketing skills. But if I could get away with it, I would hire a marketing specialist for my next job interview!

When I write I try to address the very real possibility that there might actually be personages of the female persuasion reading my musings. I try to throw in at least one" he or she" in recognition of this. The truth is that I put readability ahead of political correctness. Right or wrong, I believe that including references to both genders is tedious for the patient reader. So ladies, please forgive my political incorrectness. I am indeed honored to have you as a guest.

We analyticals would rather spend time alone with a good book or movie than with people. It's not that we dislike people, per se. We just find them boring, uninspiring, and mundane. To the all seeing and all knowing analytical, the average person is like the emperor in the story "The Emperor's New Clothes"-- there's nothing there. I mean, really, when was the last time you found someone who wanted to discuss the theory of relativity or the law of diminishing marginal returns?

Sure, the analytical thinker can appear to be cold, insensitive, and logical, somewhat akin to the personality of Mr. Spock, but the world needs these attributes. After all, it would take only one analytical lemming to save the others from mythological disaster by telling his friends, "Hey guys, I don't think this cliff diving idea is so good after all."

Every curse is a blessing in disguise. Because analytical thinkers like information in tabular format, I give you the 10 blessings for the aforementioned curses: 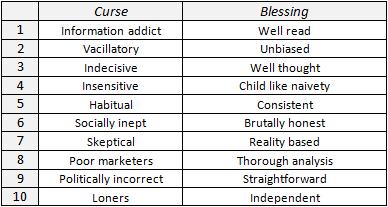 Each curse can be viewed as a blessing.

Give your favorite analytical person a break the next time you want to scream at him. The characteristics you find so annoying do have positive benefits to society.

Author's Note:  While these traits may apply in part or in whole to me and other analytical people, we are all complex creatures. It is not my intention to imply that such a simplistic view applies to all analytical thinkers.

Alan Norton began using PCs in 1981, when they were called microcomputers. He has worked at companies like Hughes Aircraft and CSC, where he developed client/server-based applications. Alan is currently semi-retired and starting a new career as a wri...