Greg Shultz introduces you to VBScript print utilities and explains why they're an important addition to the Windows 7 operating system.

Microsoft Windows 7 comes with a host of handy command-line utilities that actually pack a lot of power. Recently a friend of mine, who has been supporting Windows XP machines for the better part of his career and is getting ready to make the move to Windows 7, asked me if Windows 7 still came with the VBScript print utilities that were first introduced with Windows XP. Fortunately for my friend, Windows 7 does, indeed, still come with those print utilities. However, because they are buried away in the bowels of the operating system, they are not easy to find if you don't know that they exist.

In this edition of the Windows Desktop Report, I'll introduce you to these VBScript print utilities and explain why they're an important addition to the Windows 7 operating system. As I do, I'll take a look at some example situations where these scripts can come in handy.

The answer to the second question is easy: "Yes, you can perform all printing tasks with GUI-based printer tools." The answer to the first question is twofold: First, these scripts really showcase some of the powerful features provided by Windows Script Host and Windows Management Instrumentation (WMI). Second, the scripts offer convenience and power in that they are easy to use, are customizable via command-line parameters, and can provide quick and direct access to very specific printing tasks.

For example, suppose you have a printer that is used so heavily that it frequently needs to have its ink cartridges replaced. Rather than shutting down the printer and alerting everyone that you'll be replacing the ink cartridges, you could create and run a customized script that temporarily puts the printer in offline mode, during which users could still send print jobs to the print queue. When you're done replacing the ink cartridges, you could run another customized script that puts the printer back online, at which time, printing will continue as though there was never an interruption.

Before we actually begin examining these printer utilities, let's take a moment to look at how you run them. It's important to understand that running the printer utilities can be a bit tricky due to the terse rules governing these scripts because they actually must be run from the Command Prompt.

The seven printer utilities, shown in Table A, are located in the C:\Windows\System32\Printing_Admin_Scripts\en-US folder, which is not listed in the path. Therefore, you must actually change to this folder in order to run the utilities. And, since these utilities are designed to be run from the command line, you need to launch them from a Command Prompt window and run them using Windows Script Host's command-line-based script host (Cscript.exe).

The basic syntax for running these command-line-based scripts is

Furthermore, if any of the information contained in the parameters section contains spaces, such as My Computer, you must enclose that text in quotation marks.

At this point, let's take a closer look at some example situations where you might use these printer utilities. Keep in mind that I will describe only the parameters used in my example. Each one of the VBScript utilities has many more parameters than I will be able to show. Be sure to read the information in the "Learning More" section.

This printer configuration utility can come in handy in a number of different situations. For instance, suppose you want to build an inventory database of all the printers on your network. You can take advantage of the Prncnfg.vbs script's ability to display printer configuration information. To do so, you use this command syntax:

You could then use the redirection symbols on the actual command line to compile the output into a text file that you could later import into a database or a spreadsheet. The parameters used in this command are defined in Table B.

Table B: Parameters to configure the Prncnfg.vbs script to display printer configuration information.

If you're troubleshooting a printer problem that could possibly be linked to outdated or missing printer drivers, you can use the Prndrvr.vbs script to quickly build a list of all the files that make up the printer driver, which you could then use for comparison. To do so, you use this command syntax:

The parameters used on this command line are defined in Table C.

Table C: Parameters to configure the Prndrvr.vbs script to list all the printer driver files.

The Prnjobs.vbs script provides you with a print job monitoring utility that allows you to pause, resume, cancel, and list print jobs. Suppose that there are a number of network printers to which you can print and you have an urgent print job. You can use the Prnjobs.vbs script to browse around for the least busy printer. To do so, you'd use this command syntax:

The parameters used on this command line are defined in Table D.

Table D: Parameters to configure the Prnjobs.vbs script to list all the print queue.

The Prnmngr.vbs script provides you with a printer management utility that allows you to add, delete, and list printer connections. It will also allow you to set and display the default printer.

The Prnmngr.vbs script can come in handy if you need to quickly add a new network printer connection to a group of computers. You could create a script or a batch file that automates the installation procedure via the Prnmngr.vbs script. To do so, you'd use the command syntax:

The parameters used on this command line are defined in Table E.

Table E: Parameters to configure the Prnmngr.vbs script to add a new printer.

The Prnport.vbs script provides you with a printer port management utility that allows you to create, delete, and list standard TCP/IP printer ports. It also allows you to display and change port configuration.

Suppose that you need to create a standard TCP/IP printer port. If you already have all the settings in hand, you can perform the operation very quickly using the Prnport.vbs script with this syntax

The parameters used on this command line are defined in Table F.

Table F: Parameters to use the Prnport.vbs script to create a standard TCP/IP printer port.

When troubleshooting printer problems, chances are that you find yourself often printing test pages, which can be a multistep operation. The neatest feature of the Prnqctl.vbs script is that it allows you to quickly print a test page right from the command line. As such, if you were to create a simple script that automates the Prnqctl.vbs script, you could print a test page just by double-clicking an icon. To do so, you'd use the syntax:

The parameters used on this command line are defined in Table G.

Table G: Parameters to use the Prnqctl.vbs script to print a test page.

The Pubprn.vbs script provides you with a tool that you can use to easily publish a printer to your Active Directory. To do so, you'd use the syntax:

The parameters used on this command line are defined in Table H.

Table H: Parameters to publish a printer to Active Directory.

In this article you've been introduced to Windows 7's seven VBScript print utilities and gotten a glimpse of how they can be used to solve common problems. However, the examples, I've shown here represent only a small fraction of the features that these scripts offer. To learn more about all the features these scripts bring to the table, access Help and Support on the Start menu. When you see the Home page, type Command Reference in the Search Help box. Next, click the Command Reference Overview link (Figure A) and then scroll down until you see the seven VBScript print utilities (Figure B). Each one is a link to very detailed information on the Microsoft TechNet site. 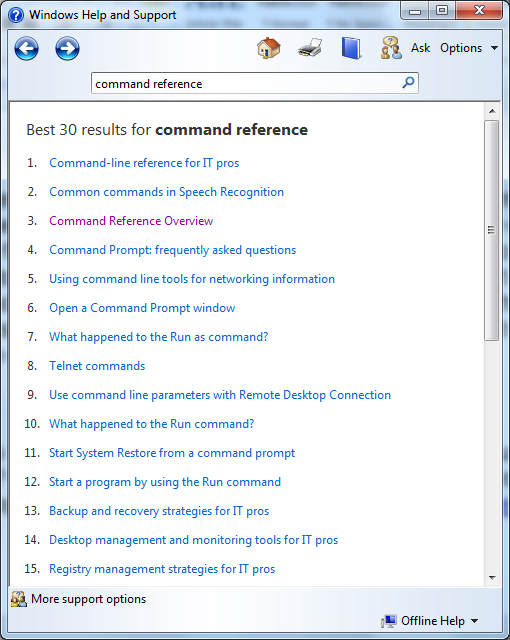 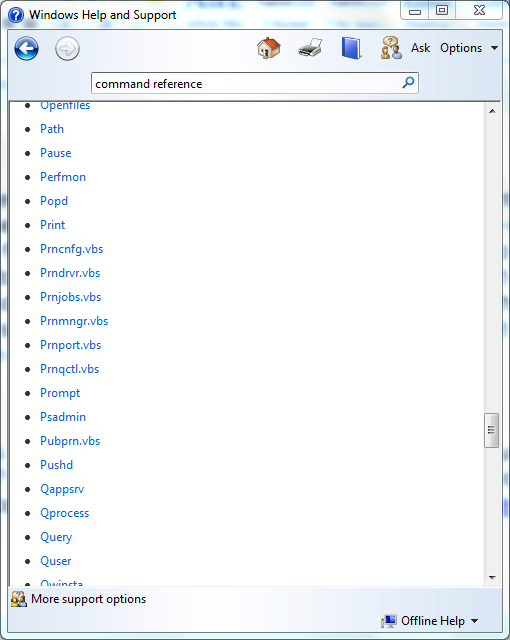 Now that you know about Windows 7's VBScript printer utilities, will you put them to use? Have you used the printer utilities in the past? If so, what was your experience? As always, if you have comments or information to share about this topic, please take a moment to drop by the TechRepublic Community Forums and let us hear from you.