Why should you pay for software when there are so many great tools out there that don't cost a dime? Gina Smith rounded up some winning freeware.

The best four-letter word is free -- especially for IT pros. And these days, with so much open source tech around and so much good will toward developers who offer astounding and useful freeware, there's a lot to wade through.

So with a little help from the CIOs and IT pros who write for my geeky techblog, aNewDomain.net, I found the best freeware out there and put it through its paces. It wasn't easy to select just 10 freeware utilities for you. But I bit the bullet anyway.

In no particular order, here are top 10 freeware packages the CIOs and tech pros I interviewed are in love with right now.

Just hours after Microsoft announced its Windows 8 Consumer Preview in Barcelona at the Mobile World Congress (MWC 2012), utility maker Stardock announced it would create a tool to easily return the now-missing Start button and menu. A week later, Stardock announced and made available for free download its little utility fix, Start8.

As an exec at Start8 wrote in a blog post, "The lack of a start button and start menu in Windows 8 has made using Microsoft's new OS a non-starter for me and a lot of other people. I like Metro, I really do -- for tablets. But as a desktop user, I need a consistent work flow that lets me have my windows together on my desktop and [I] don't want to be jerked out of that environment every time I want to start some new program."

Stardock execs say they will continue adding new features to Start8 as the Windows 8 Consumer Preview and Windows 8 Server evolve over the year.

Start used to bug me. Why do I have to hit the Start menu to exit the system? But now I'm used to it. Start8 will be a utility I will definitely run as soon as I upgrade my system to Windows 8. If I upgrade. We'll see.

I'm guessing you've heard of Ninite (Figure A), but on the off-chance you haven't, I'd be remiss not to include it here. This powerful freeware utility tops them all. It will cut hours off software re-installation time when you reformat a disk, do a clean install, or start a new system.

Ninite is essentially a tiny installer that will automatically manage and download other freeware packages. "Ninite doesn't support adware or other ad supported junk either," says Jeremy Lesniak, founder of VAR consultancy Vermont Computing in Duxbury, VT. Available for Windows and, more recently, Ubuntu 8 and higher, it automatically hunts for and installs free utilities like DropBox and 7-Zip to recently reformatted or new systems. 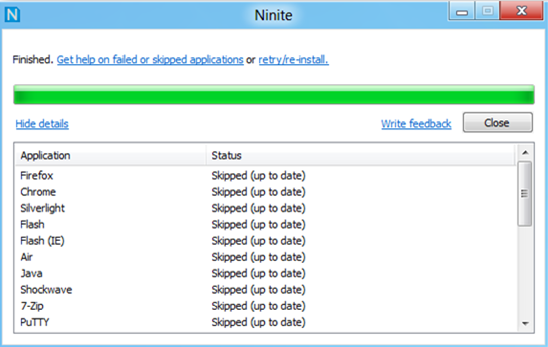 This is a free virtual machine manager, originally from Sun and now enhanced and available from Oracle. "Managing virtual machines on your desktop or someone else's is often a hassle. And it gets expensive," says Peter Baer Galvin, a Boston University lecturer, author, and CTO for systems integrator Corporate Technologies.

A new version of the software came out in December, offering more features and broad support for a variety of systems and platforms, including Linux (2.4 and 2.6), Windows NT, 2000, XP, Server 2003, Vista, and Windows 7, plus Solaris and OpenBSD. It even supports OS/2. It's an x86 virtualization software package and it works as advertised.

"It's as useful for enterprise managers and IT pros as it is for geeks who just want better control over virtualization," Galvin says. Who doesn't? VirtualBox is now in version 4.1.8.

The search feature in Windows 7 is a huge improvement over what Windows XP and Vista offered. But it still pales miserably in comparison to the freeware search tool I use constantly in Windows: voidtool's Everything. It's a lightweight utility that indexes and queries your entire drive for anything you're looking for. And is it ever fast!

Just type in some text and bang, it'll find whatever file or directory you're looking for in a jiff. I've been using this utility for the last two years and I now rely on it daily. It's so rapid at searching -- and so dependable -- that you might find yourself slacking off on keeping your files and programs in organized folders. No need for it. The left-brained among us will just use Everything to find anything. At least, that's what I do.

It might also minimize calls to the desktop. It's so easy to use and comprehensive, you won't have users calling to ask you where some random, misplaced file went. If you check out just one freeware package on this list, I'd suggest that you select this one.

Fing (Figure B), now in version 1.4, is a powerful network discovery tool, available for Windows, Mac OS X, Linux, and Android. If you've ever tried to find, say, a printer on your network and couldn't find a handy IP address for it, this is for you. "Think of it as a quick security scan," says Michael Doornbos, a security specialist and podcaster based in Washington DC. "It will let you know all the machines on your network, what operating system they run and the system names, too. It's a tremendously useful tool for administrators."

For Linux, Fing is especially flexible, working with such variants as Debian 5.0, Ubuntu 8 and up, CentOS 5.0, Fedora 10, Slackware, and 32-bit and 64-bit versions of Gentoo.

LastPass is a master password system. According to Washington DC-based security expert Todd Moore, "It's a tremendous security tool for web shopping and surfing."

Compatible with all major Windows, Mac, and Linux Web browsers, LastPass lets you set up one master password, eliminating the need to remember multiple Web site log ins. It will store your passwords -- that's cool in itself -- but it will also let you password protect other sensitive information, such as credit card numbers, social security numbers, mailing addresses, and anything else you always type into your browser because you're afraid to save it.

"Once you set it up," warns Moore, "be careful not to lose it or forget the master password you create. You'll need to type it in whenever you launch your browser." Forget the password and you're out of luck. This software is not for you if you're the password-losing type. You know who you are.

This utility is one of my personal favorites and I've been using it for years. Foxit (Figure C) stands in for Adobe Reader as freeware that makes viewing, printing, and saving your PDF files quick and easy. But where Foxit really shines is in performance. Try it once and I'll wager you never go back to Adobe PDF Reader and Acrobat.

Not only is Foxit speedier, but it includes cool features that let you add annotations to your PDFs or fill out PDF forms. Foxit comes in versions for Windows, Mac, and some flavors of Linux. 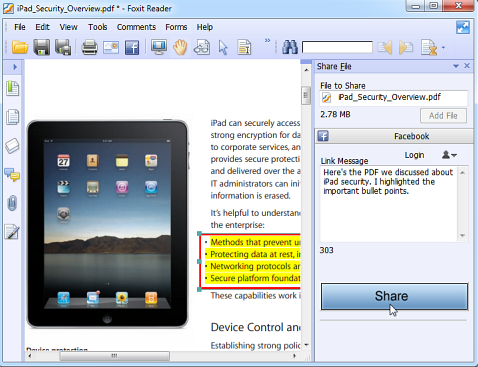 Wappwolf (Figure D) is a mobile app that runs on your iOS-based iPhone, iPad, or iPod Touch. If you share a lot of photos and documents, this is a must-have, says Julie Blaustein, a photojournalist and business development consultant in San Francisco. "It's like having your own toolbox for file editing and sharing." 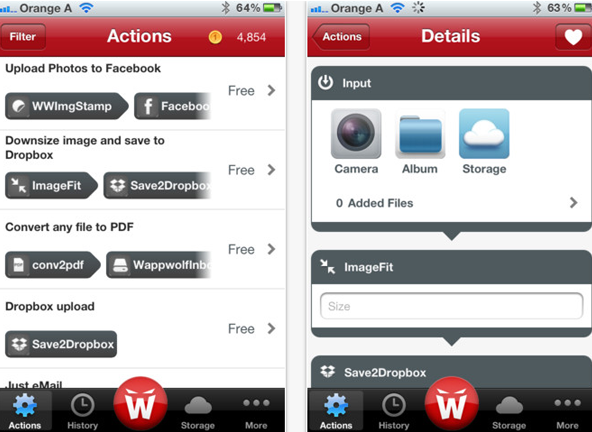 Wappwolf partnered with Dropbox early this year, so it now includes Dropbox Automator. That triggers the options you need depending on the file type you're trying to share and edit -- and in what Dropbox folder you're storing it.

Combofix is freeware that does one thing and does it well -- it detects and deletes spyware on Windows PCs. It's a powerful utility that runs at system level, so keep an eye on it and make your selections with care. A quick tip about Combofix comes from Vermont Computing's Lesniak: "Whatever you do, don't rename the [Combofix] file after you download it. If you rename it, combofix.exe will automatically self-destruct." Make sure you save it where it's easily accessible -- like, say, the desktop. Just download it, run it as an administrator, and take care.

And finally, some desert dessert [editor's note: gak!]. You probably know a lot of fun games and apps available for free. But have you checked out the open source product Stellarium (Figure E)? "It's a 3D planetarium," says Eric Finkenbiner, an IT pro for the Department of Justice who now is based in Rangoon, Burma. Stellarium lets you "view the sky from any point in the world and, at the same time, overlay it with planets, constellations and galaxies." It's a great way to kill some time. Not that you have any. I don't. But just in case you have time to gaze at the stars.... 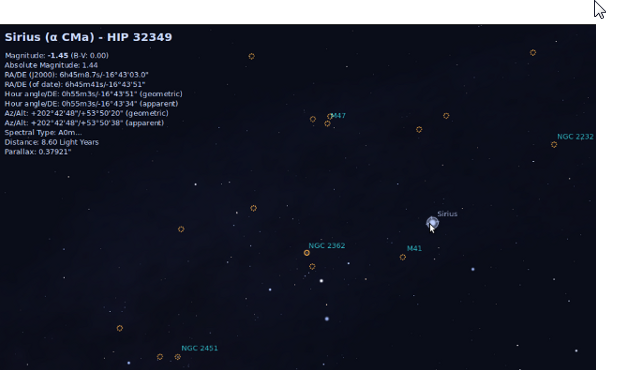 Everybody's list of free go-to apps is different. What tools do you rely on? Share your recommendations with fellow TechRepublic members.

Turn to these must-read primers to get the skinny on the hottest tech topics, strategies, and analyses. Delivered Fridays

Gina Smith is a NYT best-selling author of iWOZ, the biography of Steve Wozniak. She is a vet tech journalist and chief of the geek tech site, aNewDomain.net.