So you've started using Dell servers and have been wondering what the DRAC is all about? The DRAC, simply put, is a system management interface. It's available on most PowerEdge server models and has its own network interface for connectivity separate of that of your operating system. From the DRAC you can manage media, power, integrated system log messages, and have a remote view of the console. The DRAC is the weaker cousin of the Hewlett Packard Integrated Lights-Out (iLO) yet provides similar functionality.

The DRAC has a default TCP/IP address that is a board default you can change during initialization. You should change the default security credentials as well. When the DRAC initializes, you can enter into a configuration screen to get the basic IP address and credentials set. Once this is set, you can further access the system through the web-based interface. Figure A shows the DRAC initialization on a current PowerEdge 6850:

Probably the strongest feature of the DRAC is the media redirection capability. From the web interface, you can redirect the server's CD-ROM and floppy media to that of your web client or an image file. The best application for this is for a brand new server and no operating system is installed. With DRAC media redirection, a CD-ROM .ISO image of an operating system can be configured to be the CD-ROM and the installation can proceed from the virtual CD-ROM without physical media being inserted into the server.

The one caveat to watch for is the boot order in the BIOS. Frequently, the default configuration will have the DRAC's redirected CD-ROM as a bootable device - but, if it's below the physical CD-ROM it may not boot correctly. In the BIOS, it is listed as "Virtual CD-ROM" and the equivalent for the floppy drive. Figure B shows a sample redirection of the CD-ROM drive to an image file within the browser. 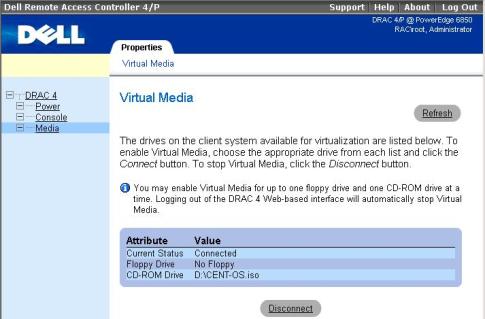 The DRAC provides the ability to remotely power off, power on, reset, and power cycle the system, regardless of the state of the operating system. This is especially handy in situations such as the blue screen of death or otherwise failed system that no native interaction can resolve. Be especially careful with the use of the remote power controls since this is one feature that always does as it is told. The security models in place can allow you to prohibit the power controls, called "server control commands." You should consider in larger environments.

The DRAC console also provides a redirection of the video display, also regardless of the operating system state. So, you could connect and see the blue screen of death, jump into the server's BIOS to configure the boot order, install an operating system, or view the console of the operating system as it's running. There are two sessions to the console permitted in most configurations. Note that these two sessions may be in addition to an operating system method, a physical console session, and any additional hardware - such as a keyboard, video, mouse controller or software such as PC Anywhere. Figure C shows a DRAC session at the computer initialization. 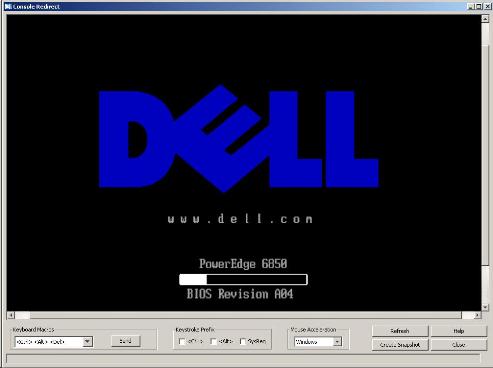 One downside of the DRAC is that on certain models if the DRAC is selected, the onboard video (both rear and front side) interfaces are rendered inoperable by the presence of the DRAC video interface. Dell usually has markers indicating that these interfaces are not available. However, these may get removed and, should you have a monitor connected to the incorrect interface, there would be no video displayed.

Firmware and other housekeeping

The DRAC has a firmware that's separate from the computer's firmware. From support.dell.com, you can download the appropriate firmware for the DRAC model in your system. The DRAC can also provide you the service tag, making the retrieval easier. I recommend that you keep this firmware up to date as inevitably some piece of functionality may not work correctly on the firmware you currently have on the unit. This is where, in my experience, the iLO has been a better remote management device. The DRAC firmware should be updated, whereas you didn't used to have to worry about the iLO firmware.

Be sure to note that within the DRAC you have access to the integrated system logs. This would include notes such as power supply failed, chassis opened, or a memory module failure. The DRAC 5 can even provide running temperatures on the system board. This can be especially beneficial in remote, harsh environment situations where unexpected results are occurring and thermal data would identify an issue. The DRAC also allows for Active Directory integration, certificate management, SNMP traps, and basic email alerting for the status of the device.

Enough to get started!

Above all else, if you have the DRAC unit on your systems - configure them. If security concerns are high with the device, have the device configured - but from the network configuration disable the port and enable on an as-needed basis. This crash course on the DRAC should be enough to get you started on ways to save you time and increase your administrative agility.