IP address management is difficult for large organizations with hundreds of networks. Windows Server 2012 has an IPAM feature that allows for management and configuration from a database perspective.

IP Address Management (IPAM) is the name of an IT discipline that involves centralized management, monitoring, and auditing of IP address spaces and corresponding infrastructure servers on a network. Smaller organizations, those with just a few IP networks to keep track of, can't appreciate the difficulty some large organizations have in tracking, assigning, planning, and changing IP addresses. For the distributed organization with hundreds of networks and just as many DNS and DHCP servers involved in delivering IT services, IPAM becomes a need, not a luxury.

Even organizations without formal IPAM applications keep track of their IP address information somehow--most typically in spreadsheets. IPAM lets you view IP address availability and configuration from a database perspective, enabling you to use your addresses more efficiently. IPAM features such as IP reconciliation and automation can eliminate the need to use spreadsheets for tracking addresses.

IPAM is performed on a Microsoft network by an installable Windows Server 2012 feature that you run on a domain member server to "centrally watch and manage" the other servers on your network that are actually doing the work. IPAM manages the functionality of the following Windows servers:

After you deploy IPAM, you can choose which services on which servers are to be centrally managed or unmanaged. Managed servers must be configured with access settings that allow IPAM to remotely manage, monitor, or audit them. You can either configure these settings manually on each server, or IPAM can provision managed servers automatically using Group Policy Objects (GPOs). Once you deploy IPAM, you use IPAM for making changes because the IPAM database becomes your central authority on IP addresses.

#1 Install the IPAM Server Role In Windows Server 2012 Server Manager, run the Manage...Add Roles and Features wizard to install the IP Address Management (IPAM) Server feature. You cannot install IPAM on a domain controller. #2 Provision the IPAM Server After installing the IPAM server feature, navigate in Windows Server 2012 Server Manager to IPAM | Overview. Click on step 2, "Provision the IPAM server". Select either the Manual or Group Policy Based provisioning method. #3 Configure Server Discover (button 3): This is just two clicks to add your domain(s) to the list of domains that that will be scanned and managed by IPAM. #4 Start Server Discover (button 4):  After launching this task, you'll observe there are one or more IPAM tasks running in the Task Scheduler. Please wait for their completion. When the task completes, the status will change to "Please refresh to update the view." #5 Set Manageability Status (button 5): Now you need to explicitly permit the discovered server(s) to be managed by IPAM remotely and/or automatically. After selecting Managed status as shown in Figure C, an IPAM Audit Task and an IPAM ServiceMonitoring task are launched. 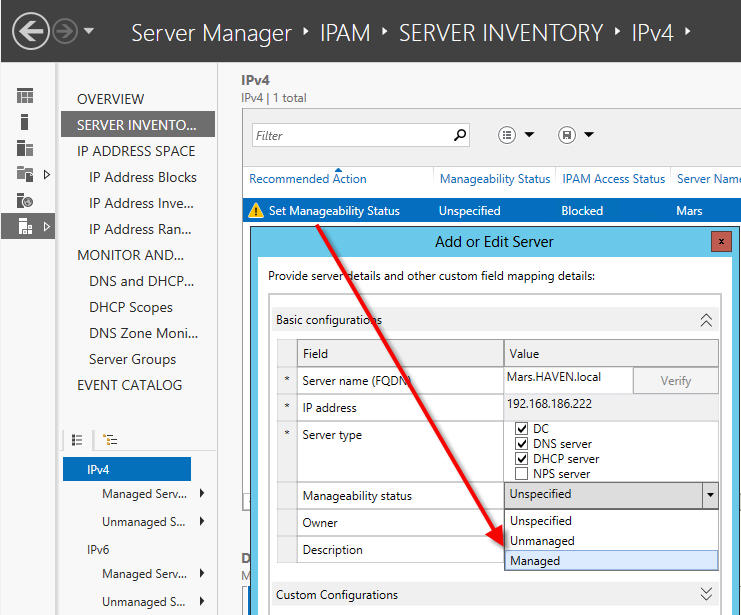 If you correctly performed the Invoke-IpamGpoProvisioning PowerShell command, and domain group policy has refreshed, your server will appear as UnBlocked and "green" status in the IPAM server list. If GPOs have not been applied, or the computer account of the IPAM server is not added to the security filtering of the IPAM GPOs, you will see Blocked and "red" status flags in Server Manager.

Tips on IPAM setup and permissions

Once you commit to using IPAM to manage your DNS and DHCP services, you basically populate the IPAM database by manually importing data or using one of the scripts in the Tips section above. Then you start using IPAM exclusively to manage your IP addresses and not the native DNS and DHCP consoles. With the proper permissions and settings, you can create and delete DNS records and modify DHCP leases from the IPAM console as shown in Figure D. 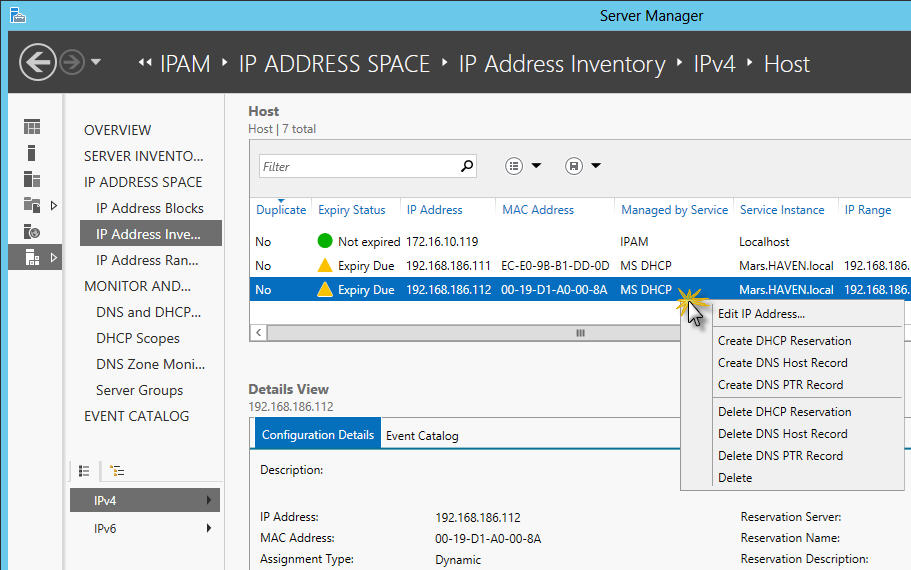 Using IPAM to convert a DHCP leave to a reservation or make other IP address changes.

Changes are made on the involved DNS and DHCP servers by IPAM; however, this is a one-way connector to the IPAM database. If you make changes in DNS or DHCP client information outside IPAM, those changes won't be reflected in IPAM until you run one of the import scripts again.

After seeing that the first release of Microsoft's IPAM solution requires some scripting and manual work to make a complete solution, you may want to investigate what other products are on the market. Some quick research found these two, and neither one of these is free.