While Google Now raises plenty of privacy hackles, it's also a stunningly useful example of the power of big data and a major advantage for Android.

This week Google released its latest update to Google Now on Android, including a handy new homescreen widget and a bunch of new options that make the predictive search tool more tuned into your interests than ever. If you want to see the future of what big data and predictive analytics are going to be able to do, then Google Now offers an increasingly powerful glimpse.

I first brushed into Google Now last fall when I was testing the Nexus 7 tablet, one of the first devices to get the Android 4.1 "Jelly Bean" release that debuted Google Now. On the Nexus 7, Google Now was either enabled by default or I turned it on accidentally, so I was surprised when all of the sudden it started sending me unprompted alerts about the weather and stocks and the status of packages I had ordered.

While at first I was oddly curious and slightly miffed that Google was digging into my search history and email when I hadn't explicitly given it permission to do so, I got over that feeling pretty quickly once I realized the value I was getting out of Google Now. It didn't take me long to think, "I want this on my phone so that I have access to it all the time."

Fortunately, I didn't have to wait long. In October, Samsung released Android 4.1 "Jelly Bean" for the Galaxy S3 (i9300 unlocked international version) that I had recently started using as my business phone. Once Google Now was on a device that I was using every day, I quickly discovered even more things that it could do. The latest update to Google Now this week has only upped the ante. 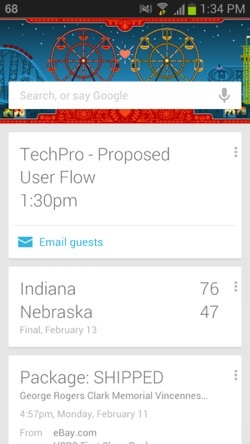 Here are what I found to be some of the most practical and interesting things that Google Now does:

Before you get too excited about Google Now, you also need to know that it has its erratic moments and false positives. Big data is still imperfect.

Here are a few examples: 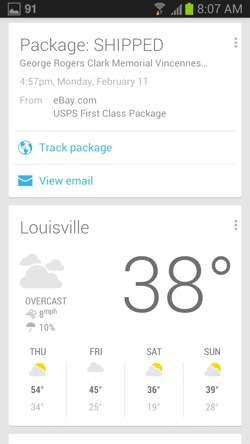 Despite its hiccups, Google Now clearly offers enough value to outweigh its imperfections as well as its obvious squishiness around privacy -- at least for me. But, the more important thing to note about Google Now is that it shows us what's going to be possible when the rest of the world gets its act together on big data.

This kind of stuff will be a victory for customizable dashboards and personalized data, and that will help us automatically sort through a lot more data more quickly. But, it's also going to raise our hackles on privacy in ways that we've barely anticipated because you can infer lots of things about people and organizations by mashing together data sources that are traditionally locked away in separate silos.

This is powerful stuff. And the companies that learn how to use it to their advantage can use it to leapfrog their competitors.

If you take the example of Google Now, it's easy to see how it gives Android a strategic advantage over other mobile platforms. Windows analyst Paul Thurrott recently wrote about Google Now: "That kind of deep online services integration is amazing. Simply amazing. And it's starting to make Windows Phone look a little, well, static by comparison."

Of course, it's not just Windows Phone that should be worried. This is just as big a threat to Apple iPhone.

Between Google Now and the Android notification system (which I previously called Android's one killer feature that trumps the iPhone), I keep finding myself drawn into my Android phone more or more. I had previously used it primarily for my work email, IM, and calendar while using an iPhone (my personal phone) for almost everything else. The continuing improvements to Google Now and Android notifications in the latest versions of Android are changing that, and that's what Apple should be worried about.